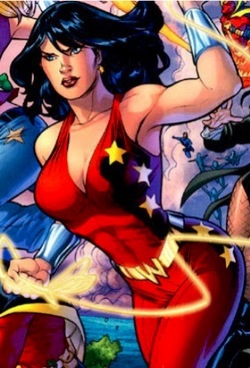 Wonder Girl is a character that has gone through many incarnations.

After the shake-up in comics that resulted from the publication of Seduction of the Innocent, DC Comics searched for a way to portray Wonder Woman that would be acceptable to parents. One of the more favored approaches was to publish a series of "Impossible Tales" in which Wonder Woman (Diana) appeared for various reasons side-by-side with younger versions of herself as well as her mother, creating a "Wonder Family." A teen-aged version of Wonder Woman was dubbed "Wonder Girl". By issue #123 of Wonder Woman (July 1961) the label "Impossible Tale" was not being included on many of these stories. In this particular issue the character of Wonder Girl is referred to as if she is an entity entirely different from Diana, a character unto herself.

Wonder Woman's younger sister Wonder Girl[1][2] made her first appearance outside the Wonder Woman book in The Brave and the Bold #60 (July 1965) as a member of a "junior Justice League" called the Teen Titans, consisting of Robin (Dick Grayson), Kid Flash (Wally West), and Aqualad (the sidekicks of Batman, The Flash, and Aquaman, respectively). After next being featured in Showcase #59 (December 1965), the Teen Titans were spun off into their own series with Teen Titans #1, cover-dated February 1966.

In addition, Wonder Girl was portrayed by Debra Winger in the 1976 Wonder Woman TV series. She was chloroformed twice in two classic scenes.