These scenes are from the 4th story in Bulletman #12 - - already this sexy flying heroine has had her lights put out with a fist to the chin twice, and been choked and hung from a rope . . . all in the previous story, (appearing elsewhere on this site). In this story she and her mate attempt to stop a serial murderer intent on killing all the attorneys and jury members who convicted him and put him in the penitentiary 20 years earlier (after his final release, of course). He finds clever ways to force people to "kill themselves". The prosecuting attorney is forced at gunpoint to eat plate after plate of prison food until he dies of overeating. After this incident, Bulletgirl and her mate get on the killer's trail, catch up with him once, but he KO's Bulletman and escapes, they find him a second time, but he tricks Bulletgirl into tripping on a cellar stairs and she falls down the steps and knocks herself out on the cellar wall. He then grabs her, manhandles her, and at gunpoint forces Bulletman to surrender without a fight. He then ties the duo up and floods the cellar and leaves them to drown (the third fellow with them is another one of the killer's enemies on whom he also wants revenge). Bulletman manages prevent drowning by breaking down the cellar door so the flood waters can get out, and the Duo gets free and captures the villain. Some good shots here. Have fun!
Source: Golden Age Comics Downloads 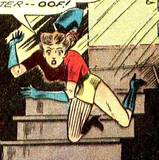 oldslim1
Aug 07, 2010
And fun it is!!! Thanks for posting all this Bulletman, Bulletgirl stuff. This is wonderful.