Fox Publications is well known for producing Phantom Lady and Rulah, but the golden age era had other lesser known greats, many of them short-lived, too short lived, if you ask me. Zegra is one of them. I think she looked great, but oddly, unlike Rulah, and Sheena, she had a very short run . . . and equally puzzling, no one seems to know who to congratulate for penciling and inking her. I've always been partial to blondes, so this gal rivals Sheena for my admiration. In this story, the 2nd in issue #2 (she had only 4 issues, #2,#3,#4 and #5), she is trying to prevent some malevolent French Legionaires from kidnapping one of her tribal maidens to be his "slave girl". The legionaire smacks Zegra upside the head, and out she goes. My personal bias is always for full body shots, and so this, to me, is one of the best fist to the face KO's ever done. She and her tribal maiden are carried OTS to the baddies camp and made to cook for and serve them. When one of them attempts to take a whip to the maiden, Zegra intervenes a second time, now with better luck. In the end the two jungle girls escape and the baddies perish, peace and jungle justice once again prevails. Have fun checking out these rare and precious expressions of GGA from the golden age of comics . . . as I said she only lasted 4 issues. What a loss. Enjoy.
Source: Golden Age Comics Download 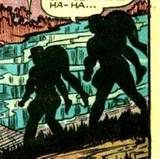 oldslim1
Aug 29, 2010
Beautiful. Love this jungle girl action. I like that knockout punch too. That was back in the days when a knockout was a knockout. Thanks.

gilslug
Sep 02, 2010
Thanks for these great Zegra scans, Paul!
Just an FYI...the reason there's no #1 is that the character in the first issue was called "Tegra Jungle Empress" and she was a redhead..
Fox chagned the name and the hair for issues 2 thru 5...
Found that info in my Overstreet Guide!