A presentation of the ladies:
The youngest one, with black hair, is Backlash (also known as Jet or Crimson).
The blond chick is Savant, real name Kenesha.
The tall one with dark hair is Nemesis.
Finally, Authority's Engineer makes a cameo.
As for the story, Nemesis enlists Backlash and Savant to prevent an Armaggeddon she forsaw, though the latter are a little difficult to convince (#1).
They then travel the Wildstorm universe, confronting the Authority (#2) and the WilDCATS.
They finally infiltrate Kaizen Gamorra's harem to gather the informations they need (Gamorra taking the opportunity to go on Jabba mode with Savant) (#5-6).
The story ends with Nemesis confronting the main villain, and successfully destroying him before passing out (#6). 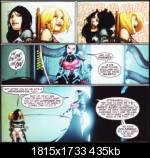 Red
Jul 24, 2008
Wow!! This is an incredible sequence, with lots of hot girls and great KO's. Thank you for posting this!