Terrors of the Jungle #21 Tangi is KO'd

Tangi is lifted overhead and carried by an evil Arab in order to toss her to his pet lion for the kill. She manages to reverse the process and stabs the lion. She is then knocked out and carried to a cliff and tossed over to her death. What she had been up to was to try to prevent some Arabic thieves from stealing from her people's salt mines. Though unconscious, she survives the toss over the cliff and makes a comeback.

But, alas, once again Tangi is hit so from behind, this time so hard she flips up into the air. She is arm carried once again, this time to the thieves hideout where she is bound.

When Tangi is hit from behind with a large rock in the next frame we see her completely knocked off her feet by the force of it. To me this makes the KO twice as good.

In this episode Tangi is manhandled, and then knocked out twice in a single storyline -- DID story-telling at its best.

Source: I own this book 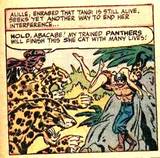 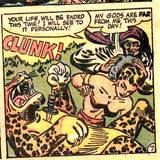 paulpicks11
Nov 03, 2009
Since I posted these scenes, I realized I should have added one more detail. Tangi never succeeds in overpowering the bad Arabs. What happens in the end is that the two villains turn on each other and destroy one another, allowing Tangi to reestablish peace and tranquility in her people's territory.