Nyoka comic books often had two or three full length stories, each with multiple chapters and each chapter having a jungle girl-in-peril cliffhanger ending. These pics are from the second story in issue #4. In this story, Nyoka is mistakenly sent a letter asking her to commit a murder for the mob. She unwittingly goes to an apartment, and when the mobsters realize they invited the wrong person, they grab her and tie her up, planning to dispose of her later. They leave to do their dirty work, and Nyoka struggles to get free and escape. Oddly, this is a "city" story, not a "jungle story", so the "jungle girl" is in city clothes. Nyoka eventually gets free and brings the bad guys to justice.

Special note: Notice how she looks on the cover of this issue -- her legs are skinny, she is flat-chested, and her face isn't very pretty. Although she looks a lot better in the interior stories, she gained a reputation as low-grade good girl art in the 40's. Still, her stories had more peril and DID than any other on the market, so she was very popular and had a 76 issue run, despite never being able to compete on the "sexy" level.
Source: I once owned this book 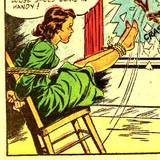