This is not from the more recent 52-week series called Trinity, but from a 2003 three-part prestige format series by Matt Wagner.

Wonder Woman has infiltrated the base of R'has Al-Ghul, who has recruited Bizarro to be his "Number 1 Friend." WW gets the magic lasso on Bizarro, but it drives him berzerk, and she is beaten into unconsciousness. She wakes up securely bound.

Later on, she and Batman come across one of R'has Al-Ghul's "Lazarus Pits" and the magic of the place makes her swoon.

I found a topic in a DC forum about "Why do WW fans hate Matt Wagner's Trinity?" and I knew right then I had to check this one out... 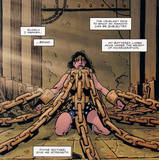 paulpicks11
Nov 26, 2009
Violent, yes, very violent. But dispite the extremely heavy emphasis on DID or heroine-in-peril, the scenes are not very satisfying because the amazing amazon with the beauty of Aphrodite is hardly depicted as beautiful, or even sexy, for that matter. When DID art is at its best, the damsel looks good, real good, and sexy as well.

gytalf2000
Nov 26, 2009
Yes, this was a very effective portrayal of brutal violence, but it is not to my taste. The beatdown of Wonder Woman was too "hardcore" for me, and she is just not drawn very well either. And the bondage is extremely "anti-erotic", if you ask me.

gilslug
Nov 27, 2009
Overall the book was extremely well-written and drawnn..worth tracking down for much more than its DiD element..but I agree w/other posters here...too violent to be a classic...an important scene nonetheless, thanks for posting!

eriepatrick
Dec 03, 2019
I can just imagine Bizarro grabbing her around the back of her waist and arch her back as he pressed a thick cloth soaked in Chloroform over her mouth and nose and her hanging in the crook of hi arm limp after she was put to sleep. Now that would be a great scene.