In Zoot #13 the veluptuous Rulah and the women of her tribe face captivity and enslavement unless they can defeat their captors. This is the theme of both the first and second stories in this issue. In the third story the plot is somewhat different: she is asked to grant safe passage to an Arab caravan carrying the harem of a nearby sheik. After Rulah gives the caravan leader her word of honor regarding safe passage, a wicked tribe of wolf men attack the caravan to capture the harem for a ransom. Rulah fights to protect them. In the second story mentioned above, she is roped in the right hand as she is about to stab one of the invaders, (who for some reason look and dress a lot like Mongolian warriors, even though this is supposed to be taking place in Africa . . . go figure). She is then dragged and tied to a pole and tormented. In the third story she is knocked out with a riding stick and put into a temple of some sorts and forced to fight wild animals for her survival. In all three stories she ultimately prevails, sometimes with a lot of help from friendly pygmies and other tribesmen. The pics below show her roped, dragged, tied up, knocked out and imprisoned. To me, she was among the top three best looking jungle girls ever to make the scene. Kudos to Fox Publications for a job well done.
Source: Comicsworld 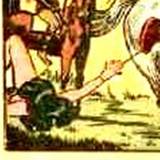 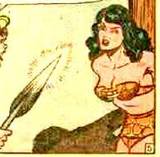