Zoot Comics #8 featured the second appearance of Rulah in this title, which had featured Funny Animals from issues 1 through 6. What a change . . . from the ridiculous to the sublime!! In this, early appearance, she had only one story followed by others far less interesting than her. In later issues of this title she would have all three major stories as Fox discovered they had a "mega hit" on their hands. She would eventually go on to have her own well-deserved named-title!! In this issue some fantasy comes to play, as she faces down a Witch Doctor who has magical lions that can only be killed with a golden blade (not the normal steel blade), all of which she does in an effort to help rescue a clueless hunter and explorer who does not believe in magic. When the witch doctor discovers she is helping the white man, he sets a trap net for her, snags her, ties her up, carries her on a pole and puts her in cage. Later he releases his magical lions to tear her up, but she manages to jump up a high wall and escape, then returns to bring jungle justice to the evil medicine man. The pics below show her netted, trapped, tied up, carried on a pole and put in a cage. She always looked great because Fox understood how to do good girl art.
Source: Comicsworld 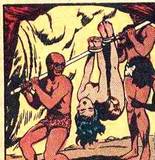