Bulletman and his sexy partner Bulletgirl have been around a long time. The first issue in this title series began in the summer of 1941. By July of '42 they were publishing #6, the issue in which these pics appeared, and the final issue was #16 which appeared in the Summer of 1946. Bulletgirl was by far the sexiest superheroine in Fawcett's line up which also included Mary Marvel and Nyoka the Jungle Girl, and undoubtedly she was very popular with the troops abroad during WWII. Too bad as the war came to an end, soldiers were sent home and this sexy heroine, along with most of the others lost millions of avid adult readers. Hence, the title was discontinued shortly after the war ended. What a shame. In this story the flying duo are investigating a "crooked boxer" who hires a gunman to shoot his opponent while the fight is going on. The two Bullet people catch the would be shooter before the gun goes off and prevent the murder. They then investigate the boxer and his manager. In these pics we see the boxer dressed up in medieval body armor fighting Bulletgirl, smashing her in the face, picking her up and forcibly carrying her, then she gets loose, and the duo subdue and capture him.
Source: Golden Age Comics 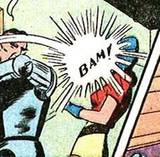