The villains in all the Bulletman/Bulletgirl stories are usually very creative. Their story in Master Comics #29 is no exception. The evil-doer is a bad guy in a "BEE" costume, and though several frames show him flying, he really isn't, he's only gliding on the wings which are a part of his costume. Just as creative as his costume is his identity. He is the chauffeur for the richest unmarried woman in the USA whose name is, get this, "Honey Clover". Get it -- a giant BEE is the villain and the innocent one is a girl named Honey Clover!!! :)

The plot is somewhat creative too. "Honey Clover" wants to help a sad-sack fellow who is trying to commit suicide because he lost his job. Her la-tee-da fiance objects to this waste of her money on a wastrel. Miss Honey ignores her fiance and gives the poor fellow a load of cash. Meanwhile, Miss Honey's chauffeur decides to kill the fiance in a highly dubious scheme to get Miss Honey to marry him instead (fat chance, but hey, makes for a good story). Bulletgirl and her beau investigate the attempted murder, and Bulletgirl get's KO'd by the evil BEE, who then ties her up. Isn't it just the darndest luck that the villains never end up killing the super heroes, only tying them up -- do you suppose that's so they can return next month for another thrilling episode. :) In the end the BEE fights the dynamic Bullet DUO to a draw and ends up jumping out of a high window to escape, and then falls to his death. What irony, a BEE dies from falling to his death. Oh yes, one more thing -- notice the cover with Adolph Hitler and Hiro Hito being spanked by Capt. Marvel, Jr.!! Remember this book appeared in August, 1942 and WW II was in full swing -- Comic Books were right in there with the latest commentary on America's most costly and deadly war of the 20th Century . . . they have never been so relevant as they were back then.

Again, I express my regrets that these pics come from a microfiche copy available on GACD. Gotta take what you can get, so enjoy!
Source:
Source: Golden Age Comic Downloads 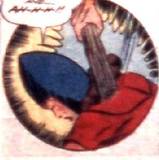