Bulletgirl made an occasional rescue of her partner, Bulletman, but the ratio of such events was about ten rescues of Bulletgirl by Bulletman to every two rescues of Bulletman by her. There is no way of knowing if this was intentional on the script writer's part or not. My guess is, he knew what would be more popular with the readers and decided to go with that. In this issue of Master Comics another unusual villain, though his "looks" are ordinary, his motives for murder are rare. The villain is a talented and gifted musician/song writer who has hit on hard times and is literally starving for lack of income to buy food. One day he comes up with a new song that he believes is a "sure thing" to be a hit. He eagerly goes to the record company to let them sample the music. The company exec decides to cheat the songwriter by telling him his song is "sub-standard" and offers to buy it for a mere $10. The desperate song writer feels cheated, but is so hungry he accepts the deal. One month later, the record company releases a recording of the new song entitled "You Gotta Be Neat" and it is an immediate smash hit played on all the radio stations. The song writer feels badly cheated and is furious, but knows he sold the rights to the song for $10 so legally he can do nothing. After hearing his song played for weeks on the radio, over and over, he snaps, goes beserk and wages war on the music company people who connived to cheat him. He murders the main record exec first, by hanging him, and before he can eradicate the others, Bulletgirl and her man are on his trail and attempt to stop his murder spree. In the process of tracking him, Bulletgirl gets KO'd and strung up to die by hanging just as was done to the first recording exec. Bulletman makes one of his many rescues and together they apprehend the maniacal musician, peace and harmony restored. Again, these pics are from Golden Age Comic Downloads and sadly are microfiche copies . . . . making them predictably inferior to paper copies. Hope you enjoy them anyway.
Source: Golden Age Comic Downloads 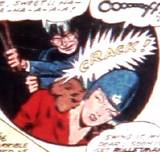 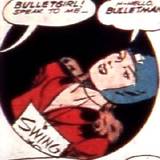