Nyoka never disappoints! In this story an archeologist friend of hers spies on some pygmies to learn the secret of how they make shrunken heads. He believes he has discovered the secret, and rushes to tell Nyoka the good news, but is killed right in her presence by a flying spear before he can reveal the secret. As he dies in her arms, he asks her to take his notes to America and give them to his Archeological Institute. The pygmies, desparate to keep their secret, follow Nyoka and trick her into coming to their camp where they grab her, manhandle her, and pole carry her to be executed. She escapes and runs to a boat enroute to America, fulfilling her promise (but did the Pygmies ever get justice for killing the archeologist? -- apparantly not. . . . but then again, their precious secret is revealed, so that's a form of poetic justice, right? Nyoka's writers apparantly saw it that way) Unfortunately most of the scenes were very small and needed to be magnified, which loses a lot of quality in the process. Hope you enjoy anyway.
Source: Golden Age Comics Download 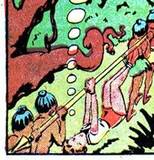