At the risk of repeating something I've said before, I must start out by saying that Nyoka never had a reputation for being "top-shelf" GGA. Perhaps it was intentional that Fawcett wanted her legs to be skinny, and her bosom less than a C cup so they could fend off the fans of Frederick Wertham (he wrote Seduction of the Innocent claiming all gga comic books seduced teenage boys with sex and violence). Still, inspite of her physical limitations, she had more DID scenes than any other comic book heroine -- hence, the art was less than 5 stars, but the script writing was best of the best, and she has left us with many wonderful scenes to stir our juices. In this story, somewhat creatively conceived, the writer has her face down a fictional animal called a "drapoel" (leopard spelled backwards) which is a "man-eater" but has the cunning and intelligence of a human being. The drapoel stalks her, knocks her unconscious, carries her OTS to his lair, and proceeds to have her for supper. She awakens, and fights him with a mirror (actually a shiny peice of tin she happens to find in the animal's den -- yeah, right, what are the odds of that being there?) Then she manages to trick the beast into becoming angry, and he leaps at her and she dodges aside causing him to hit his head on the stone wall of the cave. He dies, of course, and our heroine lives to thrill her fans with another episode of DID. Pics below show her KO'd by the drapoel, carried away unconscious, waking up, shining the mirror. All in all a good episode with an out of the ordinary menace to thrill the reader.
P.S. If you are "put off" by the idea of a "man-eating"
cat who has the intelligence of a human and eats humans, consider this: If deer were the most intelligent species on earth, and a human with equal intelligence stalked them, captured them and ate them for supper, it really would be no different than a drapnoel doing it to humans, right? In reality, venison eating humans stalk deer every year, and eat them by the thousands -- intelligence seems to matter not in this situation. Something to think about, huh?
Enjoy.
Source: Golden Age Comics Download 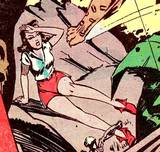 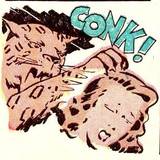 oldslim1
Jun 17, 2011
From an old Nyoka fan from way back this ain't bad. Quite a turn on actually to have a beast with an overly developed brain stalk our pretty heroine dressed in shorts. He's out for revenge. Sneaking up behind her, knocking her out cold then carrying her away. Yes this turns the juices on for a guy with a heroine knockout fetish. Thanks for posting.