Apparantly the Willoughbys and the Kents of Eastern Kentucky had a serious feud in the distant past, and the Kents killed a lot of Willoughbys before it all ended. Many decades later, a descendent of the Willoughbys has vowed vengeance on the Kents, and to assist him, he kidnaps an electrical engineer who has invented a lightning bolt ray gun. He apprehends the gun and begins his death crusade on everyone named Kent. Bulletgirl and her mate attempt to apprehend him, but Bulletgirl is zapped with the gun - - she is knocked off her feet but she survives the shock, even though the villain, accompanied by his hired helpers, escape to continue their murderous rampage. She pursues them, and later she is captured at pistol point in her civilian identity as Susan Kent. She is tied up but Bulletman flies in to rescue her. Pics below show her zapped, waking up, held at gunpoint and tied up with hands over her head. No really great looking shots, but still a little something to whet the appetite, plus one not too bad pinup of the flying heroine.
P.S. This issue came out in January, 1942. WWII had only begun one month earlier in December 1941. Since the book was probably already prepared for printing weeks before the war began, it is no suprise that there are no references to Japs or Nazis in the storyline . . . those emphases would be sure to come within the next few issues to appear.
Source: Golden Age Comic Downloads 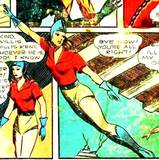 oldslim1
Sep 05, 2010
Thanks for posting this. Bulletgirl is a trooper, never backing away from the action. My kind of superheroine.