Nyoka got her own title in 1945 and issue #7 came out in '47. True to form she faced peril after peril in every issue. Sometimes I fantasize what a great thing it would have been if the writers of Wonder Woman, Sheena, Bulletgirl and a host of others had had the same concept as the writer of Nyoka did . . . namely Perils of Nyoka. What if Wonder Woman's books were titled "Perils of Wonder Woman" and written accordingly. What a feast we'd all be having. As it is, things aren't all that bad . . . we still have a lot of good stuff around to keep the juices flowing, right? But isn't it exciting just to imagine "what it would be like if we had even more". In this issue there are two great stories, and these pics are only from the 1st. I plan to post pics from the other story in a few days. In this story the Jungle Girl is traveling on a transatlantic flight in which some escaped convicts are sneaking out of the country. She discovers what they are up to, but they are wise to her too, and they are in the process of planning to kill her when the plane suddenly goes into a nose dive and crashes on an ice cap somewhere near the North Pole. Everyone survives but all are knocked out except Nyoka who wanders from the crash in a daze. Eventually she falls down and faints, and lies unconscious in the snow. Her father is on the flight with her, and pleads for a rescue party to go out and find her. One brave (bearded) passenger (he happens to be from a communist country, calls everyone "comrade" -- remember it's only 1947 and Russia was still considered a friend and an ally at that time) volunteers to go out and find her, and he does and carries her back to the plane. Pics below show him struggling to arm carry her back to the plane. Once inside, a blanket is put over her to warm her up. But shortly after that, the convicts grab her and carry her back out into the snow and tie her to a pole where some frozen jungle animals have recently thawed out after centuries of suspended frozen animation . . . and these "thawed out" animals attack her. (Yeah right, what'll they think of next :) Finally she is rescued a second time and goes on to arrest the baddies. Have fun!!
Source: GACD 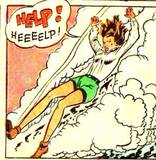 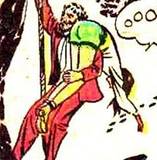 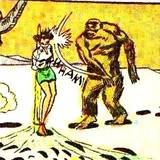 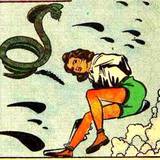 paulpicks11
Sep 23, 2010
Agreed, Buckley. Just imagine Batgirl or Hawkgirl or Black Canary in this same story instead of skinny legs Nyoka. Wow . . . what a thought! Still, something is better than nothing where DID is concerned, right?

Buckley555
Sep 23, 2010
Right...well said paulpicks. All of your 'girls' would work. I'd throw in Wondergirl (minus her belt),or a classic 'jungle girl' like Shana. heck, with these scenarios any heroine Babe would work!