What a great issue Nyoka #7 was. Already appearing on this website are pics from the first exciting story in this very stimulating issue, and now here are pics from the second story. As I've said many times, what made her great was the writer's concept of using serial type stories, with multiple chapters, and at the end of each chapter providing a cliffhanger situation where life or death hangs in the balance. Oddly, very few other superheroine writers used this story-telling technique . . . but for us lovers of DID art, this has to be the quintessential most exciting way to develop a plotline. In this tale, the second in this issue, the jungle girl is deep in the jungle with her beau (Larry) collecting gazelles and other animals for a zoo back in the states. The duo is unaware that their movements are being watched by a wild boy who grew up in the jungle with no parents or family (actually he was lost 10 years earlier and somehow survived to grow into a wild jungle boy). The Jungle Boy does not like the fact that they are capturing helpless and innocent animals, so he attacks their van and frees two captured gazelles. In the process he chases Nyoka, she falls and is knocked out, and he arm carries her to the top of a tall jungle tree with intentions of dropping her to her death. However, she survives the fall, and is able to eventually capture the boy and bring him back to the USA where he is finally reunited with his true family, goes to high school and becomes an all american high school football star. Go figure!! Many great pics of the arm carry and head KO. Have Fun!
Source: GACD 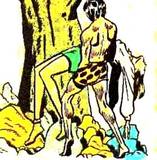 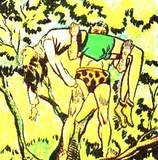