It's a "no-brainer" sometimes to say "comic books are fanciful" but I'll say it anyway. . . . anything is possible in comic books, and Nyoka stories are no exception to this rule. In issue #8 the petite jungle girl meets "Jee-Raf Jed" the American born, owner of a Giraffe ranch deep in the jungles of darkest Africa. Jed raises giraffes for zoos and for racing. But in this story where the African jungle meets the "old West of America" a villain comes on the scene named "Black Bullet" and he and his gang of gun slingers want to drive "Jee-Raff Jed" out of Africa so they can take over his ranch. Nyoka gets in the middle and decides to defend the good guy against the outlaw. That's where the DID storytelling comes in big time. Nyoka is shot at while on horseback, pulled off her horse, manhandled, tied to a tree for scalping, hit in the head with a glancing bullet, knocked out, rescued, arm carried, wakes up, goes after Black Bullet again, gets hit in the head with a gun butt, knocked out, and rescued again. Finally Jee-Raf and his crew capture Black Bullet and his gang and peace and justice and our favorite DID gal are restored to normal. In the second story Chief Tangi is a good chief but his half-brother wants to usurp his rule and take over rulership of the tribe, which the Chief intends to be passed onto his own 13 year old son "Little Tangi". Nyoka sides with the good chief and in the ensuing struggle she gets conked in the head, wakes up, falls from a canoe into a huge rock, lies unconscious in the water, gets grabbed by a huge alligator, mouth-carried by the gator, wakes up, escapes certain death as the alligator's lunch, and finally gets taken to the guillotine to have her head cut off, but she escapes that as well. Great issue, loaded with damsel in distress art. Have fun and enjoy!!
Source: GACD 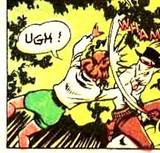 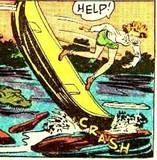 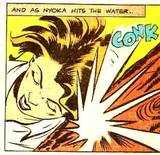 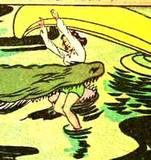 oldslim1
Apr 29, 2011
Action was the name of the game in the Nyoka comics. Got knocked out continually. Really enjoyed these as a kid. Thanks for posting these pics. All these are new to me.