Seldom at a loss for new and unique distressful situations, Nyoka in the second story of issue #9 is faced with two bad guys who are pitted against one another, and Nyoka, though on the sidelines, is caught in the crossfire. Basically, it is a bizarre tale about a well-to-do Chinese Mandarin (aren't all Mandarins well-to-do?) who makes a strange deal with a "down-and-out" Chinaman that if he will forfeit his life he can have $100,000 to enjoy for 6 months before his bill will come due. Strange as it obviously sounds, the "down-and-out" chinaman agrees to the deal (possibly he is thinking it is a joke, and if it isn't, that he can still run away and disappear when his time is up). As the episode begins, his time is up and the Mandarin has followed him to Burma to collect his "just reward". (Apparantly this Mandarin gets a kick out of killing people, so he hires victims, at $100,000 a pop, to feed his evil appetite). By sheer coincidence, the Mandarin meets Nyoka in Burma - she is there to hunt bears -- and he offers to hire her to find the "chinaman on the run". He does not tell her why he wants the man, only that he is there to collect on a debt, so Nyoka unwittingly agrees to work for the Mandarin and hunt for the man on the run. She does manage to catch up to him but he KO's her with a fist to the chin, then he rubs her with honey and leaves her for "bear supper" -- obviously because he does not want to die. Nyoka wakes up to a giant bear licking her and hugging her to death. She survives, but soon finds out why the "man-on-the-run" is really running, and decides to report the Mandarin to the local police and have him arrested. In the end, the Mandarin slips on a banana peel, gets knocked out and arrested, and the dumba** chinaman agrees to turn himself in and also go to prison for 9 years. Nyoka feels vindicated and peace and justice prevails. Pics below show head KO, bear hug, and tied up during an elephant stampede (which the Mandarin did to her when he found out she wanted to put him in jail). She always survives every peril, and we wouldn't want it any other way, right? Enjoy!!
Source: Fawcett 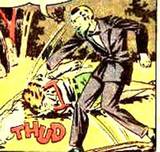 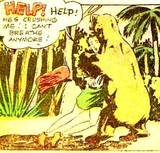 paulpicks11
Aug 13, 2011
Hey Emma,
Just an observation . . . F/F punchouts probably account for less than 10% of all the KO's on this website. However, here is the URL for one which I posted a year ago. Simply copy and paste it to your browser and click "GO". Maybe this will prompt a small giggle from you. :)
http://www.sleepycomics.com/show.php?id=5905