It's too bad we do not know who wrote the Nyoka stories, because the man (or woman) was a master story teller. In the first story in issue #10 the pretty- but-not-very-sexy (due to flat chest and skinny legs) jungle girl is investigating smoke coming from a long extinct and supposedly inert volcano when she stumbles on a cave hiding a secret world of dinosaurs and cave men (oddly, we saw no cave women so how could they last 10 million years with only men -- go figure??). Her gun is no use against the giant reptiles, so she tries to run away from them but finds herself trapped by a group of cave men wielding clubs. One of them KO's her with a simple flick of his little finger to her forehead. He then drags her cave man style to his little apartment somewhere in the cave. When she wakes up she finds out that he wants to be her friend. The other cave men want to eat her, so he fights them off and hip carries her and her pet lion out of the cave and then blocks the entrance with a huge boulder so no one or thing can ever get out. (If one cave man can move the boulder into place, why can't 6 move it out of place? go figure.) Nyoka brings her new friend back to civilization, he quickly masters English, enters college (yeah right!!) and becomes a champion ball carrier for the college football team.
As I said, the story teller is masterful, though a tad daffy as well. Pics below show her falling down in her flight from Tyrannus Rex, hit by the good cave man's little finger, dragged unconscious, waking up, and hip carried in the flight from the cave. This story probably would not work for Wonder Woman, but it certainly could for Sheena or Batgirl. It's fun to fantasize those gals in this story. BTW, I plan to post the pics from the 2nd story in this issue later this week. Watch for it and be sure to have fun. 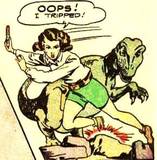 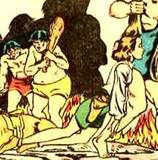