Although we do not know their names, the artists who sketched Nyoka must have changed several times in the course of her long 77 issue run. One reason for believing that is the case is the occasional random and noticeable improvement in her sexiness (specifically: legs, face and bosom). She simply looks better in the 2nd story of issue #10 than in the previous few issues (not counting issues 1,2, and 3) She always comes through on the peril scale, but it's definitely more fun for the reader when she looks sexier, even if only a little bit. In the 2nd story of this issue she is exploring a cave when she falls into a deep pit, and discovers an amazing laboratory where giant human robots are being engineered (perhaps the idea came from Hitler's notion of breeding a "super-race of Germans" in WWII). Anyway her father has been captured and is being coerced into helping the scientific process, but he is refusing. Nyoka falls on top of one of the sleeping robot giants, wakes him up, is grabbed, manhandled and carried to the lab where she realizes her dad has also been captured. In an effort to convince Nyoka's dad to cooperate, the mad scientist has Nyoka strapped to a table and threatens to make a robot of her unless Mr. Gordon (Nyoka's dad) helps them. Wanting to protect his daughter, Gordon agrees to help the mad scientist, who then stupidly releases Nyoka who later runs away and returns to throw a monkey-wrench (really . . . she did . . . she threw a real monkey wrench)into the robot apparatus causing it to blow up. After that the human robots return to normal, and angry at the scientist for making them robots, they beat him up and Nyoka turns him over to the authorities. Pics below show her falling, grabbed, manhandled, and strapped to the table. Have more fun! 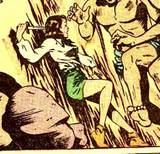