Yankee Girl may well have the distinction of being the most short lived superheroine ever to appear. To the best of my knowledge, she appeared in only two issues of Dynamic Comics, and two other times in a couple of little known titles. She was the creation of one of the all time comic book publishing greats, Harry "A" Chesler, but his interests seemed scattered all over the place, and sadly he dropped the ball on promoting this great looking, well scripted, red, white and blue clad superheroine. Her powers were mystical and magical, something akin to the Marvel Family, only her powers came from ancient Egyptian deities, after she spoke some magic words of incantation. She gained the power to fly, and super strength. She was still vulnerable (unlike the 3 Marvels) and a blackjack to the head could easily put her lights out in a heartbeat. In this, one of her very few stories, she is investigating the death of a wealthy widow woman who is a cat lover. The duo who robbed and killed the widow are -- and I love this -- a bald-headed waiter, and a midget (i.e., a dwarf) -- not the usual ruffian types. This unlikely duo also springs a trap for Yankee Girl, and leap out from behind a corner to suprise and easily KO her -- despite their lack of manly prowess and macho abilities -- that's the part I like so much. I think the unconscious pic of her out cold on the ground is one of the best ever to appear anywhere during the golden age of comics -- it really gets my juices flowing. I just wish she had had 100 or more outings, instead of only a precious two. One more thing: Bill Black (my all time real life hero) revived Yankee Girl for his Americomics lineup and she became a key member of his fabulous FemForce and continues to thrive to this day. Three cheers for Bill. Have fun.
Source: GACD 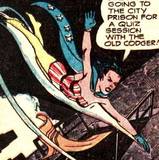 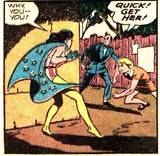