As I mentioned recently the first 20 or so issues of Jungle were sparce in DID, even though Ann (Kaanga's mate), Camilla, and Fantomah all appeared in every issue . . . . GGA yes, DID no. Apparantly Fiction House did not quite yet fully realize just what they had on their hands . . . but by issue 22 and 23 that all began to change. In this issue (#23) Ann has a heap of trouble as some baddies use her as bait to capture Kaanga and retrieve a million dollars worth of diamonds from him (he found the apparantly ill gotten diamonds when another baddie's house burns down as he looked on.) Ann is captured and used to lure him to their trap. It works at first, but Kaanga gets free and whips up on the baddies in the end.
Source: GACD 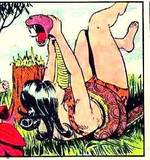 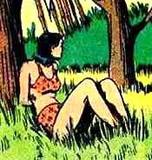 gilslug
Jan 02, 2011
Thnaks for these great scans, Paul! It's funny how in the early issues Ka'anga is speaking the King's English, and only later on in the series starts with the "Me Tarzan/You Jane" diction.I had also forgotten that Camilla was a Viking Queen prior to her reinvention as a jungle girl!