If there were a comprehensive encyclopedia of golden age comic book superheroines, I'm sure it would say that Yankee Girl has the distinction of having the fewest stories ever published for a superheroine. I'm only referring to the golden age, mind you, not the years after the comic book code appeared (1954). . . . surely we all know Bill Black's Americomics published dozens of Yankee Girl stories in the 80's and 90's. The scenes on this page come from one of only two stories that I know of in which she appeared in after her debut in 1947. She was a great looking superheroine, with her red, white and blue caped costume, and I'm sure she would have developed a large and loyal fan-base if she had been given the chance, but until Bill Black came along in the 80's, she never was. In this story an old acquaintance of hers shows up after a long absence and turns out to be a baddie. He is a powerful illusionist, and causes a cab driver to crash by creating the illusion of a 18 wheel truck heading straight toward him. After renewing acquaintances with Yankee Girl, he goes on to marry an unsuspecting widow who is wealthy, then quickly creates an illusion that causes her to fall off a cliff thereby leaving him to inherit her rich estate. Yankee Girl decides to investigate, and in her alter ego, she wins the bad man over to wanting to marry her for her money as well. She gives him large sums of money as bait, and he takes it. He creates an illusion of an oncoming train while Yankee Girl is driving a car, and she crashes into a telephone pole swerving to avoid the non-existent train. She jumps out of the car just in time and survives the crash, then she flies after the baddie, collars him and turns him over to the authorities. Pics below show her knocked from the car by the collision with the telephone pole, which she is fooled into believing is an oncoming train. I like her looks, and wish she had a couple hundred more stories from the golden age, rather than just the paltry two she did have.
Source: GACD 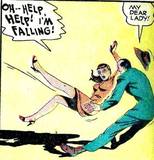