As I've said before, anything is possible in comic books, and especially is this true in Nyoka stories despite the fact that she is an ordinary girl with no special superpowers. We are not sure who authored her stories but he had a very fanciful imagination, and it is on full display in this story. Nyoka and another woman explore a mammoth cave that somehow houses the original Sphinx of ancient Egypt. The other woman is on a quest for ancient treasure, so she tries to eliminate Nyoka. She causes Nyoka to fall off a cliff while mountain climbing, but Nyoka survives. Later, inside the cave she KO's Nyoka with a rock and ties her up. Nyoka manages to escape, but in the meantime, and here is where the storyteller's fanciful imagination comes to play, the bad woman meets up with Cleopatra's daughter, still alive and living in the cave for 2000 years, and still looking like a teenage girl. She says she and her bodyguards have been in a kind of "time warp" for a long time and they do not know how to get home (no mention of how they fed themselves for 2000 years, or where they found water to drink -- fanciful indeed). All of Cleopatra's jewels are hidden here and are stored in the ancient sphinx's mouth. The bad woman kills Cleopatra's daughter and puts on her clothes and pretends to be her, and orders the servants to give her the jewels. They then all embark on a journey out of the cave, for the first time in 2000 years, all except Nyoka who remains locked inside the ancient Sphinx and left to die there. Once on the outside the ancient Egyptian soldiers begin to age quickly and all suddenly die. Nyoka somehow survives, escapes the cave, chases and captures the evil woman. She has lots of perilous scenes along the way, falling from a cliff, KO'd with a rock, tied up in the cave. Always a heap of things to enjoy whenever Nyoka appears.

P.S. I'm glad Red did not "lock" this scene immediately after releasing it, because he has enabled me to do an experiment with Photobucket. You will notice that two of my pics were blocked by them because they "do not meet their guidelines". However I have reposted the same pics to my photobucket album and thus I have been able to repost them to this page for viewing. I'm doing this as an experiment . . . I want to see if Photobucket's censors will catch them a second time and eliminate them again or whether they only make an initial sweep of my pics, and seldom check them after that. Let's see how it goes. The two restored pics are the final two on this page, #21 and 22.
Source: Digital Comics Museum 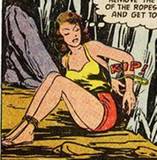