As I said many times before, Nyoka never disappoints. In this issue (#38) she appears in three separate stories. The first two are pretty boring, then WHAM, the third story is full of DID scenes, almost as if to make up for the lacklustre first two episodes. I have posted over twenty pics from this third story because it is one great perilous scenario after another. She is hired by a big museum to search for jewels beneath a volcanic lava deposit. Almost from the git go she is secretly being watched by two baddies who know she is after buried treasure and who determine to get it for themselves. They chase her, she falls and breaks her leg, they take her maps and leave her stranded in the jungle. The volcano erupts and hot lava flows toward her, she tries to crawl to safety and manages to topple into a river, and float to a safe place where she manages to crawl ashore and immediately faint. Friendly natives find her and carry her unconscious to the jungle doctor, who wraps her broken leg. She immediately returns to hunt for the buried treasure -- no explanation for how she is able to ambulate on her broken leg, but she does (in comic books anything is possible, and especially is this true of Nyoka comic books.) She is promptly KO'd by the baddies and tied up. Eventually she brings the thugs to justice, but experiences many perils along the way. What a gal . . . she takes licking after licking, and keeps on ticking. Enjoy,
Source: GACD 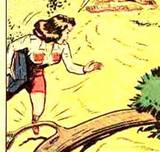 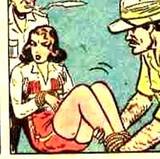