The Blonde Bomber was a crimefighter without any special super powers. She could throw a punch with the best of them, but she was a 120 pound beauty with no special athletic abilities or skills. She appeared in Green Hornet Comics from issue #7 to the end of the series, issue #47. In this story she is investigating a series of murders of young beautiful girls as well as some South American diplomats. Turns out the serial killer is a Facist mad man, with a Brazilian helper, who sends pretty girls and diplomats a dozen roses which have been injected with a poisonous gas which kills anyone who sniffs the roses. Blonde Bomber is fortunate enough to spy the culprit actually injecting the roses, but before she can confront him she is KO'd with a terrific blow from behind by the killer's Brazilian helper. The deadly duo then hold the unconscious heroine in a standing position in order to make the hundreds of patrons of a large night club believe she is drunk. They drag her outside to their car and take her to their hideaway and tie her up. She, however, also has a helper, Slapso, and he follows the baddies to their hideout in a horse-drawn carriage and rescues his admired female idol. Together they chase the baddies and the killer is knocked off a high balcony and falls to his death . . . peace and justice again prevails. Pics below show her KO'd, manhandled, and tied up. Let's all keep on keepin' on with this great website and enjoy every minute of it.
Source: GACD 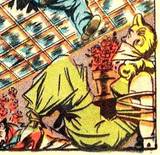 sjdrake2006
Oct 17, 2011
The blonde bomber was drawn with a great deal of personality in her features. She looks a little like Barbra Stanwyck. I feel she also looks rather similar to Kit West, so maybe they share an artist. Both Bomber and Kit racked up a reasonable percentage of well=portrayed head Kos in their adventures, as did the less attractively drawn Firehair.