Although she was clearly done by dozens of different writers and graphic artists, ninety-nine percent of the time no artist or script writer is ever named for Nyoka, and this issue of Master Comics is no exception. But I can honestly say, I believe this graphic rendering of the Jungle Girl is the sexiest ever done . . . . in terms of face, legs, bustline and hips. The story is fair as well, but 99% of the time the script writing is five stars . . . she's always in peril, just the way we want it. In this short 5 page episode she and Larry are exploring a cave in search of a valuable diamond. She finds it in the forehead of a statue of a giant Hindu god. However, although Larry is not around, when she tries to remove the huge baseball sized diamond from the statue's forehead, it suddenly comes alive and grabs her and squeezes her . . . apparantly as a result of some kind of spell cast over it. Alone, Nyoka slowly suffocates in the powerful arms of the statue. Larry eventually finds her and punches the idol in the forehead, unwittingly causing it to release the unconscious Nyoka. They then devise a plan to remove the diamond from the rear of the head of the idol, and when they do it squeezes no-one and they make off with the rare jewel. Pics below show her falling into a cave hole, grabbing hold of Larry, being pulled up, and later squeezed by the six-armed idol. As I said, to me she looks better than ever in this otherwise fairly obscure story. Enjoy!!
Source: GACD 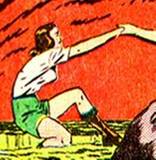 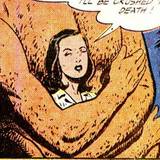 oldslim1
Aug 15, 2011
Her face IS prettier in these pics, but those shorts are still too darn long. Nevertheless Nyoka has always been a favorite of mine since way back to my teen years.

paulpicks11
Aug 16, 2011
The shorts may be too long, admittedly, but her legs are not skinny, as they too often were in her other appearances. . . . and agreed, her face is prettier here as well.