If anyone has any doubts that Tegra was the official precursor to Rulah, consider this: Tegra and Rulah both had a pet black panther with the same name -
Saber - and both jungle girls were published by Fox publications. Also, except for the fact that Tegra wore a zebra skin bikini, and Rulah wore a giraffe skin bikini, they look alike, especially their hair-do (ignore the fact that the gal on the cover has red hair while the one in the inside story has black hair, that's apparantly an anomaly). Only one issue of Tegra ever appeared, and when #2 appeared her name was changed to Zegra, and she became a blonde, no longer a dark haired jungle beauty. In this, her first and only story, Tegra's little tribe is visited by some space aliens in a space craft and dressed like ancient Romans but with space age weapons which zap and paralyze their victims. At first the jungle primitives are no match for the alien visitors, and Tegra is zapped, carried OTS, and tied up. But Saber chews her ropes, and she fortuitously discovers that space dust which has collected on the outer shell of their space ship is lethal to the aliens, causing them to burst into flames. Tegra quickly gathers a bag of the space dust and launches an attact which sends them scurrying to escape, but when they take off their space craft crashes into a nearby lake and all die. Jungle justice is served. Not a bad tale for 1947, and infused with the FOX tradition of being very generous with DID art. Enjoy.
Source: Digital Comic Museum 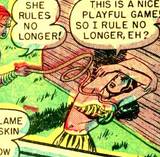