If you thought Camilla was always a sexy jungle queen you are wrong . . . she began her career in the first 14 issues of Jungle Comics as Queen of the Lost Empire, and she lived in the days of the Roman Empire. How she got from the 3rd century to the 20th Century and from the Mediterranean to darkest Africa must remain forever a mystery . . . anything is possible in comic books, right? In this issue some sailors arrive from Carthage and notice her swimming, are immediately attracted to her, and decide to capture her and take her home for the King's harem. She is easily manhandled and dragged on board their ship and hauled away . . .. but not before "Sir Champion" sees her captivity and vows to rescue her . . . which he eventually does. Not the best of DID pics, but does give a little of the flavor of her early stories and her earlier incarnation as queen of the lost empire. Have fun!
Source: Digital Comics Museum 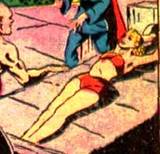