As our founder Red said recently sleepy scenes are becoming fewer and fewer to obtain. So with some apologies I offer these two pics from Captain Flight #5 published in 1944 by a little known publisher Four Star Publications. The cover scene is a very sexy girl, unidentified and not appearing inside the issue, being arm carried while conscious and tied up -- she does not appear to be a superheroine. Coming to the rescue is Red Rocket -- not Captain Flight, as one might expect since this is his book. The other pic is of a girl from the Capt. Flight story inside the cover -- she is being manhandled by a German spy who wants information from her father. Capt. Flight comes to the rescue, wrestles with the spy, and unintentionally fires the spy's weapon into the spy's chest, killing him peace and freedom prevailing. As Red said, good pics are getting harder and harder to find. Hope this small offering will provide some of you with a moment of enjoyment.
Source: Digital Comics Museum 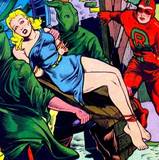