Barbara Gordon (Batgirl) leaves Gotham City to investigate a team known as The Movement. Mistrust on both sides leads to a confrontation in which Batgirl is knocked out.

The Movement plans to unmask her, and in classic fashion does so in a contrived way that allows Batgirl to wake up and escape before her identity is revealed.

Barbara's memories of her traumatic experience with the Joker then sends her into a momentary rage, during which she fights off the members of The Movement.

Source: Digital copy of the comic. 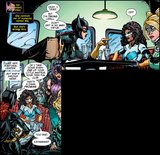 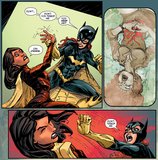 AdC85
Nov 16, 2014
Thanks, Monsieur Paul. I was quite surprised to see them dedicate an entire page to image #3. It seems Barbara just can't get a break!

oldslim1
Dec 06, 2014
Good work. Several nice shots of Batgirl after she was knocked out. She stayed unconscious for a long time.