When a G.I. Joe convoy transporting the captured Baroness comes under attack, the Baroness escapes into the woods. Due to the ongoing Cobra Civil War, the appearance of some Cobra soldiers is no comfort, and when the Baroness runs into her rival Krake, she ends up knocked out yet again. One of the Cobra soldiers then lifts her over his shoulder and carries her off. 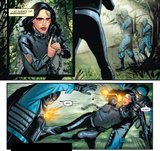