Diamondback (Rachel Leighton) has been captured by the Skeleton Crew, but she remains determined to escape.
At one point Crossbones (Brock Rumlow) and Mother Night (Susan Scarbo) set out to retrieve the captive, but Mother Night declares that this is a trivial task that she can easily accomplish on her own. That turns out to be a mistake, because upon entering the cell Mother Night is attacked by Diamondback, who slams Mother Night's head against the floor, knocking the villainess unconscious. Diamondback then takes parts of Mother Night's costume and puts them on, hoping that this deception will allow her to escape. 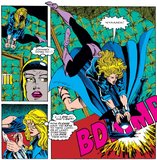 Sailornapper
Dec 20, 2014
Remember this. The whole story about her capture started in the 390s I think. Worked up to this moment and further on. Actually was a good story and one of my earliest comics.

AdC85
Dec 21, 2014
It is indeed quite the long story arch, Sailorsnapper. Diamondback also gets quite comfortable wearing Mother Night's costume here; she first does so in #409 when she knocks the villainess unconscious. Mother Night then reappears in her full costume in #410, only to get taken prisoner herself. Then in #411 Diamondback once again relieves Mother Night of her costume (off page) to infiltrate a Weapons Expo together with Captain America, which carries on into issue #412.