Superia (Deidre Wentworth) attempts to take control of AIM by killing its CEO Alessandro Brannex. The scheme fails, and Superia is captured by M.O.D.A.M.. Brannex, who turns out not to be dead, then orders M.O.D.A.M. to dispose of Superia.

Much to her chagrin Superia is later rescued by 'that flag-draped male' Captain America who had mistaken Superia for his friend Diamondback. 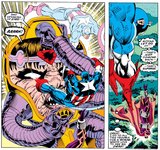 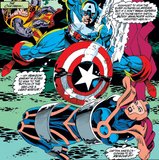