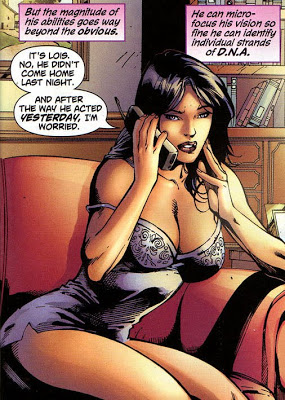 Lois Lane is the typical damsel in distress, perhaps the most famous one ever. Not only that, but she is known for having TONS of knockouts in her comics in the Silver Age.

Taken from Wikipedia:
Lois Lane-Kent is the primary love interest in the DC Comics' Superman stories. Created by writer Jerry Siegel and artist Joe Shuster, she first appeared in Action Comics #1 (1938). Lois' physical appearance was originally based on a model hired by Siegel and Shuster named Joanne Carter, who would later marry Siegel. Lois's personality was based on Torchy Blaine, a female reporter featured in a series of films from the 1930s. Siegel took her name from actress Lola Lane, who portrayed Torchy in one of the middle entries.[1]

Lois is Superman's chief romantic interest and, in the current DC continuity, his wife. Like Superman's alter ego Clark Kent, she is a reporter for the Metropolis newspaper, The Daily Planet.

Depictions of Lois Lane have varied since her character was created in 1938, spanning the 70-year history of Superman comic books and other media adaptations. During the Silver Age, she was the star of Superman's Girl Friend, Lois Lane, a comic title that had a light and frivolous tone. However, the original Golden Age version of Lois, as well as versions of her from the 1970s onwards, portray Lois as a tough-as-nails journalist and intellectual equal to Superman. One thing has remained throughout the character's 70-year history, however: she has always been the most prominent love-interest in Superman's life and is seen by many fans as the archetypical comic book love interest.