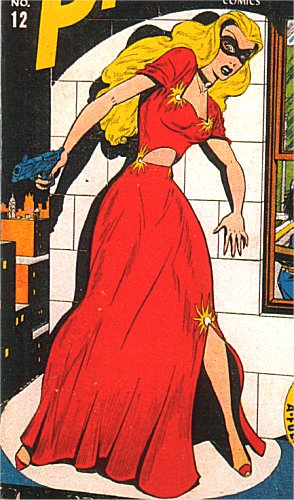 Blonde Phantom is all about head KO's! In almost all of her stories, she would walk around in a sexy red dress investigating some crime and then WHAM!, she's out like a light. Of course, she always prevailed in the end.

Taken from Wikipedia:
The Blonde Phantom (Louise Grant Mason) is a fictional masked crimefighter in the Marvel Comics universe who first appeared during the 1940s period fans and historians call the Golden Age of Comic Books. She was created by writer-editor Stan Lee and artist Syd Shores for Timely Comics, a predecessor of Marvel Comics, in All-Select Comics #11 (Fall 1946).

The Blonde Phantom had no superhuman powers. She was an athletic woman, and a fine markswoman with the conventional handgun she carried. She also had excellent secretarial skills, as the secretary for the Mark Mason Detective Agency, and later as the secretary of New York City District Attorney Blake Tower.