One of the greatest chloroform covers ever drawn. The artist is Brian Bolland.

The cover depicts Catwoman being chloroformed from behind by Batman. There's a subtle sexual tension, with Catwoman trying to stay awake, while Batman's hand holds her stomach. Catwoman wraps a whip around Batman's neck, trying to escape.

The scene happens on a white background, emphasizing the shadows of the two characters.


Here's the complete K.O./wake-up/bondage/escape scene of Catwoman for issue #8. 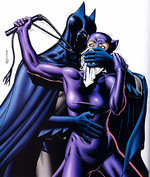 davesb45
Nov 01, 2009
Really cool sequence, well done. I have some thoughts about how it would have been better. I won't share them here.