This is just a great Vampirella story, featuring two well drawn knockouts. The story is simply titled 'Bugs - An Infestation of Fear'. The writer is Kurt Busiek and the artist is Arthur Adams.

The story STARTS off with Vampirella getting knocked out by a bug in the woods. The bugs launch a webbing at Vampi that causes her to lose balance and hit her head on a rock. Great last panel showing her sleeping.

The follow up shows the bugs taking a cocoon wrapped Vampi to their lair. Vampirella thinks she's done for, but the bugs let her go! The bugs then speak to her and she finds out they aren't so bad!

Vampirella races back to a town of humans, who are planning to hunt the bugs. Vampi tries to reason with them, but the town sheriff has her knocked out with a rifle butt to the head! It's yet another well drawn KO scene.

She wakes up in a prison cell, where she quickly uses her super strength to break free. 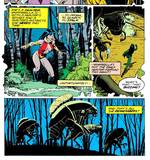 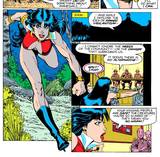 gilslug
Jul 03, 2012
I've always liked this story...one of the few recent example of the series returning to the more lighthearted tone it had in the 70's..great find, Red!

Red
Jul 03, 2012
@gilslug I liked it too. The art style fits Vampirella perfectly, and really enhances her sexuality. I wish they did more stories like this, instead of the bloody violent ones they have now.

eriepatrick
Jul 03, 2012
No so much into head kos but I just love the way she is drawn and inked in the work.

Wyvern
May 16, 2018
Very nice panels! Good story, the bug men and their webs, tentacles and swarming attack style make them very menacing, and Vampirella is very sexy here too. Kudos!