An amazing knockout sequence for Mantra.

First scene in Prime #8: Mantra is captured by Doctor Vincent Gross. She fights some mutant scientist like guys and is knocked out by a big tentacle monster. She is then thrown into a van.

Mantra #7: while in the van, Doctor Gross places a gas mask on Mantra's face to keep her unconscious. She manages to wake up though and escape.

Later in the same issue, Mantra is knocked out again by Doctor Gross with tranquilizer darts. Mantra wakes up in Doctor Gross' lab where he tries to get her armor off. 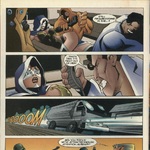