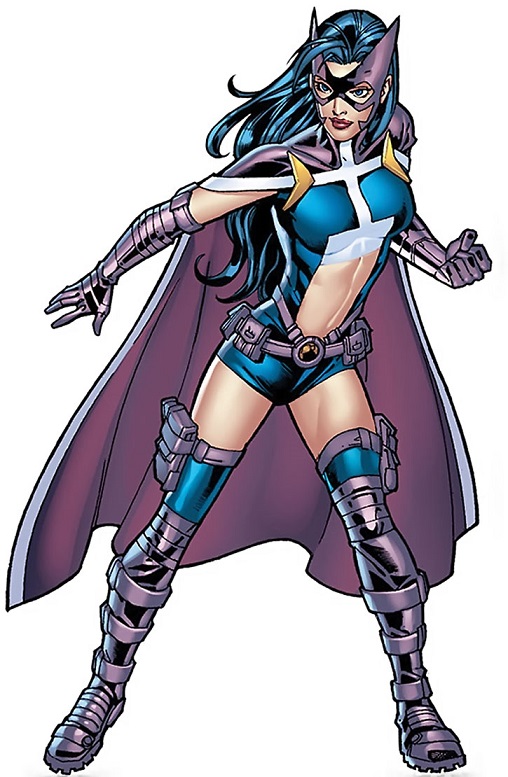 The Silver Age Huntress was Helena Wayne, the daughter of the Batman and Catwoman of Earth-Two, an alternate universe established in the early 1960s as the world where the Golden Age stories took place. Earth-Two was also the home of the Golden Age versions of various DC characters.

Created by Paul Levitz, Joe Staton and Bob Layton, her first appearance was in All Star Comics #69 (December 1977) and DC Super-Stars #17, which came out the same month and revealed her origin. The bulk of her solo stories appeared as backup features in issues of Wonder Woman which were published in the early 1980s.

Helena was trained by her parents to become a superb athlete. After finishing school, she joined the law firm of Cranston and Grayson, one of whose partners was Dick Grayson, alias Robin.

Helena began her super-hero career when a criminal blackmailed her mother into resuming action once again as Catwoman -- an act which eventually led to her death. Helena, deciding to bring the criminal responsible to justice, created a costume for herself, fashioned some weapons from her parents' equipment (including her eventual trademark, a crossbow), and set out to bring in the criminal. After accomplishing this, Helena decided to continue to fight crime, under the code name, the "Huntress."

In All Star Comics #72, Helena formally joined the Justice Society of America where she struck up a friendship with fellow new superheroine Power Girl. As a JSA member, she participated in several of the annual JLA/JSA meetings, most of which took place on Earth-One. Helena was also briefly associated with the superhero group Infinity, Inc..

During the 1985 miniseries Crisis on Infinite Earths, Helena was killed while attempting to save the lives of several children. After Crisis ended, Helena Wayne's existence, like that of her parents and Earth-Two's Dick Grayson, was retroactively erased from the remaining Earth and the world no longer remembered her.